We are saddened by the recent passing of our friend, Larry Korn. He is best known for being the translator/editor of one of the most influential books to touch the lives of scores of natural farmers and permaculturists,  The One-Straw Revolution by Masanobu Fukuoka. 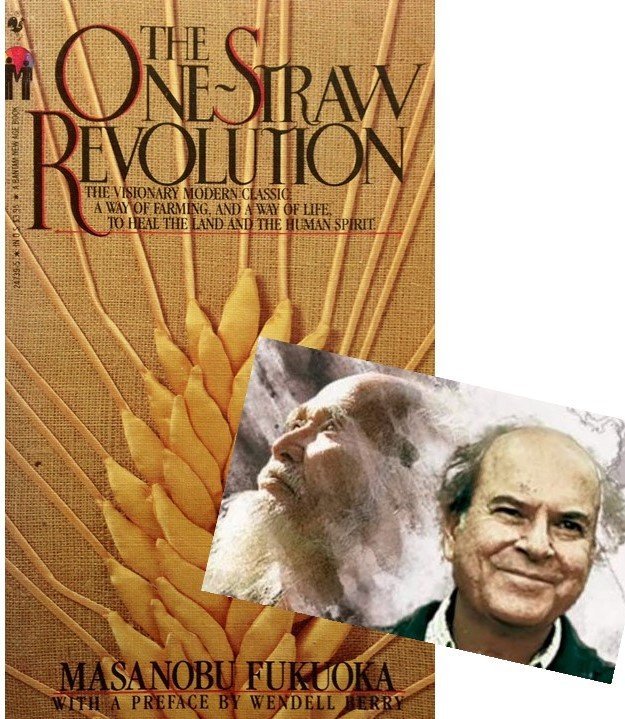 Why is this book so influential?
The Middle East and Northern Africa were once very fertile areas. With widespread annual tilling/plowing, a civilization will always end up losing it’s topsoil and become arid. One-half of the topsoil has now be washed away on the North American continent. The One-Straw Revolution shows us how annual grain growing can be done without tillage so that we can grow food WHILE building topsoil!

Larry was one of the teachers of the PDC Course I took in 2004 and I credit him for cementing my understating and passion for permaculture. He was a walking example of kindness, integrity, knowledge and dedication.

Larry was so knowledgeable and generous that in the early days of Midwest Permaculture we consulted with him often on a wide range of subjects, and when available we would invite him to attend or call into our courses. We wanted our students to hear the wonderful story of how he came to meet Masanobu Fukuoka, live on his farm for two years, take on the task of translating The One-Straw Revolution into English and then, couriering it through to publication.

Larry’s story was so impactful to the few who got to learn from him that we decided to record one of his live telephone interviews and then included it into our Foundations of Permaculture Webinar Series so that all of our students could now learn from Larry’s teachings. The webinar series is the pre-training materials for all of our PDC Courses.

Now, well over 1,000 permaculture students have heard this webinar.

As a token of our gratitude to Larry we would like to gift this webinar interview (video includes many pictures) to the greater permaculture community. It runs 1 hour and 45 minutes.

Here is to your memory Larry, and a million “Thank You’s” for all you did for so many.

_____________
Highlights
Below are a few highlights from Larry’s story should you not have the time to listen to the webinar.

As a college student in the 1970’s, Larry had an interest in farming, intentional-community living and Asian studies. This led him to living in a farming commune in Japan where he heard about an unconventional farmer who had not turned his soil in over 20 years.

Larry sought this farmer out, Masanobu Fukuoka, and ended up living on his farm in southern Japan for two years while learning about his unique farming methods.  Larry lived in one of the mud-walled huts in Mr. Fukuoka’s orchard and performed farm chores with the other workers and students.

The paradigm shift of One-Straw Revolution was Masanobu Fukuoka’s technique of never turning the soil while still being able to get two annual crops per year off his land — rice and barley.  Growing annual grains WITHOUT TILLING was completely unheard of in 1975 and was considered not possible to do. This is why Larry had to find and learn from this amazing farmer.

It was during Larry’s time on the farm that Masanobu Fukuoka published his book, The One-Straw Revolution in Japanese.

How does this relate to the world of permaculture?
It was Larry who introduced Masanobu Fukuoka to Bill Mollison!

The first permaculture book was written by Bill Mollison and David Holmgren – called Permaculture One.  As we understand it, Bill was often asked why there was no information in the book on the growing of annual crops and his reply? “We do not yet know how to do annual farming without the tilling soil which prepares a seedbed and slows down weeds.”

As a result of this introduction, when Mollison penned the book, Permaculture Two, therein lies many references to Masanobu Fukuoka and the pioneering work he had done with to-till farming.

Without the work and dedication of Larry Korn, the reverent farming approach of Masanobu Fukuoka may have never reached Westerner’s eyes  and the early history of permaculture might have been very different indeed.

It is with great love and appreciation that we honor your life and work Larry. Rest well our friend.